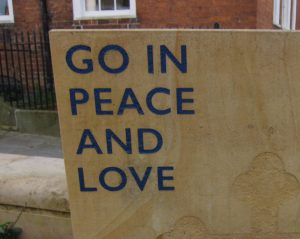 Inspired by the Common Lectionary reading for the Proper 17 (usually 13th Sunday of Pentecost), Year A

Go out into the world in peace.
Have courage.
Hold onto what is good.
Return no one evil for evil.
Strengthen the faint-hearted.
Support the weak.
Help the suffering.
Honour all persons.
Honour all creation.
Love and serve the Lord,
rejoicing in the power of the Holy Spirit.
And may the love of God,
the Light of Christ,
and the power and communion of that Spirit
be with us all.
Go in peace. Amen.”

‘Almost every week for thirty-four of my thirty-five years of pastoral ministry, I’ve blessed the congregations I’ve served with a benediction based on this passage from Paul’s Letter to the Romans (in turn based on his First Letter to the Thessalonians).’

‘The Connecticut congregation I served for six years used it, so I did, too. When I was called to United Church of Santa Fe, I brought the benediction with me. We weren’t sure the church would survive those early years. The benediction’s charge to “have courage” gave us an anchor. It still does.

‘Once in a while, we switch to other blessings. Because we’re a Desert Faith Church, we added “Honour all creation.” But usually this variation on Paul’s theme challenges and blesses us each week. Like the traditional wedding vows, it covers the waterfront. And even if it’s the same words, who we are as a congregation and as individuals changes. As someone said, ” I always hear something different, because I’m different.”

‘The Rev. Dr. Reuben Sheares, III, once described scripture, prayer, and hymns of worship as “the Word that shapes us.” I’m grateful each week for this ancient benediction’s power to do the same.’

Thank you, God, for the plumb-line of Paul’s ancient words. Amen.

Talitha Arnold is Senior Minister of the United Church of Santa Fe (UCC), Santa Fe, New Mexico. She is the author of Mark Part 1 and Mark Part 2 of the Listen Up! Bible Study series and Worship for Vital Congregations.

from ‘The world that shapes us,’ 3 February 2018, StillSpeaking Daily Devotion, United Church of Christ