This reading can be used to explore the theme: “Hineni: Here I Am” –  looking at the idea of spiritually showing up and saying ‘Yes’ to God’s call and invitation.

Narrator: Now the boy Samuel was ministering to Yahweh under Eli. The word of Yahweh was rare in those days; visions were not widespread.
At that time Eli, whose eyesight had begun to grow dim so that he could not see, was lying down in his room; the lamp of God had not yet gone out, and Samuel was lying down in the temple of Yahweh, where the ark of God was. Then Yahweh called,

Samuel: Here I am!

Narrator: and Samuel ran to Eli, and said,

Samuel: Here I am, for you called me.

Eli:  I did not call; lie down again.

Narrator: So Samuel went and lay down.  Yahweh called again,

Narrator:  Samuel got up and went to Eli, and said,

Samuel:  Here I am, for you called me.

Narrator:  Now Samuel did not yet know Yahweh, and the word of Yahweh had not yet been revealed to him. Yahweh called Samuel again, a third time. And Samuel got up and went to Eli, and said,

Samuel:  Here I am, for you called me.

Narrator: Then Eli perceived that Yahweh was calling the boy.  Therefore Eli said to Samuel,

Eli: “Go, lie down; and if he calls you, you shall say, ‘Speak, LORD, for your servant is listening.’”

Narrator: So Samuel went and lay down in his place.  Now Yahweh came and stood there, calling as before,

Samuel: “Speak, for your servant is listening.” 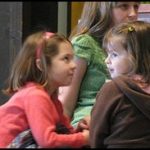 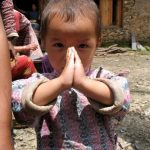 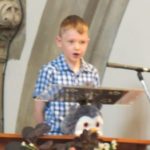