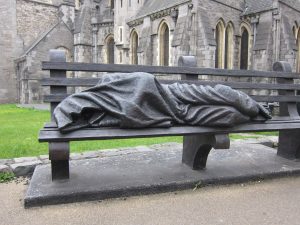 This was originally written to be used as the opening prayer on Reign of Christ Sunday (traditional Christ the King Sunday).

In spite of its language, I have included this prayer because Cara uses it to creatively critique the language of masculine power traditionally used to describe Jesus.


Jesus, this morning we hail you as our King.
A king unlike any earthly ruler,
A king who turns our ideas about monarchy
and power up-side-down.

All hail King Jesus!
The king who rides on a donkey,
Who kneels with a towel around his waist
and rolls up his sleeves.

All hail King Jesus!
The king who lives in ordinary neighbourhoods
amidst the bustle of ordinary life.
The king whose friends are fishermen
and unconventional women.

All hail King Jesus!
The King who didn’t issue proclamations
but instead told stories that inspired and intrigued;
daring to imagine a different kind of kingdom,
one where the last come first.

All hail King Jesus!
The King who laid aside his power.
The King who was betrayed by his friends,
condemned by his religion,
murdered by the state,
and even with his dying breath
spoke words of forgiveness and love.

Jesus we pledge our allegiance to you,
and to your dream for the earth.

x
Top
We use cookies to ensure that we give you the best experience on our website. If you continue to use this site we will assume that you are happy with it.Ok