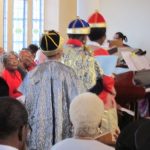 Reading and Heeding the signs of the Times

Note:  The “king” or “magi” or “wise one” may be named as appropriate for the congregation.  The part may be played by either a woman or a man.  The “minister” might be any worship leader.

Minister:    …This week of Epiphany the story continues in Matthew’s account, with the Wise Ones from the East seeing a sign in the sky, a …star.   And they heed the sign, thinking it divine, and follow where it leads.  Let us join our roving reporter in Palestine and find out more.

Reporter:   I am Ms Foresight with the BBC, that’s the Bible Broadcasting Corporation, reporting to you from Palestine. A new heavenly body has been seen moving in the skies above us.

Reporter:   Sir!  Sir, what do you think of the new heavenly body recently seen?

Reporter:   Leona Lewis?  No!  And we are not in London!  We are in Palestine.

Reporter:   (Point up to the star on the tree.) I am talking about that star or comet that’s appeared above our land.  What do you think of it?

Reporter:   (To the congregation)  Obviously that new star does not mean much to him.  [Look into the distance]  Ah, here’s a caravan coming from the East with three very distinguished looking travellers in the lead.  Who do you reckon they are?  The three kings, the Magi perhaps!  We shall see. Sirs!  Sirs, who are you?  Where do you come from, and what do you think of the new heavenly body recently seen?

Reporter:   [The reporter aside to the congregation] Babylon and Persia? Aren’t those the lands of Iraq and Iran, today? What good things can we expect from those places?  Trouble!  Terrorism!  Foreigners coming to our land trying to take our jobs!  This man doesn’t seem so bad, but I had better watch myself with these strangers.  [Speak to the King] What do you think of the new heavenly body recently seen?

King:          Well, for different cultures a new star means different things.  In our land, a new star should be noticed, should be heeded.  My colleagues and I, we come to investigate.

Reporter:   What does a new star mean in your land?

King:          In our lands of  Persia and Babylon, a new star means a royal birth. When this bright star appeared, we came as fast as we could. Along our way here, we stopped in Jerusalem. But, we found a king already there. An old man, and not a very nice one.  (Say to the congregation) And his name is, King… HEROD. And King Herod has sons who aspire and desire his throne.

Reporter:   So, you say that this new star is NOT for Herod or any of his sons, for no one in his royal family?

Reporter:   If the new star resting above that quiet, little village of… Bethlehem… is not for King Herod and his sons, who of royal birth is it for, and what does it mean?

King:          For us, it means a new King born today. A gift from God to Israel, and all the world, a ruler who will be a good shepherd to everyone.

Players pause and then sit in the front pew.