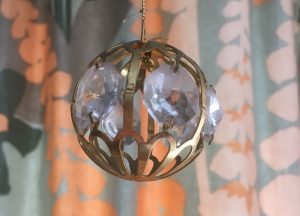 My golden ball hangs by a golden yarn
From my wood-gold curtain rail;
It is half-obscured by the golden drape
With its pattern of golden sun-rays.
Behind it the fading golden sky
Is streaked with the grey of evening clouds.

And then I recall that my golden globe
Was formed from the glowing white-gold ash
Flung forth from the burning golden heart
Of bursting Mount St. Helen’s.
The fading gold of the cooling ash
Turned grey like the evening clouds,
Until the skill of the maker of glass
Created my beautiful golden ball,
Which hangs from my wood-gold curtain rail.

I live on a wonderful blue-green ball,
Enfolded by floating clouds of grey.
It hangs in space as it spins its way
Round the flaming sun which controls it all.
But the blue-green ball is changing now;
Its embracing clouds have lost their power
To guard from the magic rays of the sun,
Giving life or death to the globe below.
My kin and I have despoiled those clouds
By the ash we have flung from our oil-soaked hearts.

God strengthen our will to make clean again
Our blue-green ball, as it hangs in space
Like my golden ball, with its golden yarn,
Which hangs from my wood-gold curtain rail.