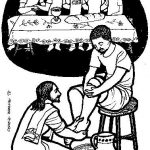 Written after hearing of the visit of the South Sudanese leaders to the Vatican.

Pray with me. God may the words of my mouth and the thoughts of all of our hearts be acceptable to you. You are our rock and our redeemer. Enter our hearts, we pray. Amen.

The host’s action shocks them. Whatever thoughts they entertain about power, freeze. Indeed, they freeze. They stand like statues as the host bends before them. He moves from person to person. When he comes to one of the most vocal, a cry of protest arises, but the host proceeds.

Let me set the scene. A room full of hand-picked leaders. People accustomed to seeing power exercised, now itching to exercise that power, themselves. People vying with one another to be the one to ascend to the pinnacle of power. Some of those gathered were friends, once upon a time, some merely acquaintances. All share a common journey along which each has seen and tasted power.

They argue amongst themselves as to who is greatest.  They compete as they edge closer to the top, anticipating the day of their glory.…

A familiar image this Maundy Thursday, one you might easily assume to be the disciples gathered with Jesus. I also could be describing our own political leaders, or leaders in America, Australia, Venezuela or any number of nations around the world.

This particular scene, from only last week, involves leaders hailing from South Sudan. There is South Sudan’s President, Salva Kiir. Beside him stands his vice president designate, Riek Machar, who tried to topple President Kiir only six years ago. The resulting bitter and bloody civil war fanned on by these rivals killed thousands. These two leaders, and others gathered in the room, are not particularly nice people.

Ostensibly representing their clans, these leaders’ egos swell as they rise towards the top. Power intoxicates them. They lose sight of the needs and desires of South Sudan’s ordinary people, people exhausted by years of war and bloodshed. Ordinary people who now yearn for peace.  It is said that power corrupts; it also, blinds. South Sudan’s leaders cannot see the way forward. Fortunately, others can envision a way forward and the possibility of peace.

A common thread ties the people of South Sudan together.  A thread unites the different clans and tribes into one, an unlikely thread, albeit, but a common thread all the same– Christianity. They are all Christians. In a plea for peace in Christ’s name, Arch Bishop Justin Welby suggests a South Sudanese leaders’ retreat.

The Vatican agrees to host. At the end of the retreat the South Sudanese leaders gather for an audience with Pope Francis. From his papal throne, the pope reads a prepared statement which concludes, ‘As a brother, I ask you to remain in peace. I ask you from my heart, let us go forward, together.’ Then, the pope asks if he might approach them. This puzzles the South Sudanese leaders, but of course, they agree.

In white robes, the 82-year-old pontiff stands, descends from his throne and shocks the leaders. Whatever thought they entertain of power, freezes. Indeed, they freeze. They stand like statues as he bends before them. He kneels and kisses their feet. First President Kiir. Then he moves to Vice President Machar. Machar protests, and gestures to stop him, but Pope Francis will not be denied. What an amazing tableau! Almost unimaginable.

For, to whom does a Pope bow? … No one. A Pope might bow and kiss the earth when arriving at a new country, but popes bow before no man, before no woman. The Catholic Church acclaims the Pope’s infallibility. He personifies heavenly power on earth, and exercises sovereignty over all Catholic believers.

Pope Francis descends from his regal perch, and joins those gathered. He will not pontificate from his papal throne. Rather he submits himself, subjugates himself, at their feet. Kneeling before his Sudanese Christian brothers and sisters, he humbly proclaims their unity in the family of God.

This Good Friday Eve, gives us a night to remember. We remember heavenly power forsaken, and earthly humility embraced. Jesus models, that in and through him, God establishes a new order, a new commandment: You shall love one another, as I have loved you.  Jesus illuminates the path ahead for those who claim to follow him, for his disciples, for us, proclaiming, ‘This is what it means to follow me. This is authentic discipleship. Turn away from power-seeking arrogance and your desire to be served, and embrace a humble life devoted to a new commandment, devoted to loving and serving others.’

Jesus’ love excludes no one. Jesus washes Judas’ feet. Jesus shares bread and wine with him.

I am not a starry-eyed dreamer. I realize that Pope Francis’ act of humility may not change the Sudanese leaders. They might not take into their hearts his message of unity and peace. Jesus’ action did not change Judas; his heart was closed.

This evening, we remember, and take into our hearts what Jesus says and does. Humility. Servitude. Love. Extended even to those who betray him, even to you and me.

Pray with me.
Gracious God, enter our hearts tonight.
Like the South Sudanese leaders shocked by the Pope, we stand shocked by the vision of Jesus bent, washing, embracing the dirty feet of others.

We look to the throne but find you kneeling at our feet.  Unshackle us from shock, deliver us from despair and awaken us from apathy. Change us. Empower us to do all that faith in you would have us do.

As we continue in the rituals of tonight’s service, may we experience the revelation of your presence in the washing, the bread-breaking, the cup sharing, the singing, the silence and the darkness. 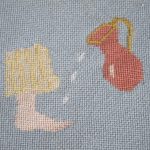 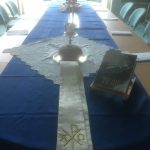 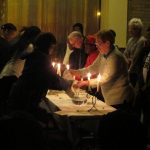