What words do we use to describe the mystery of Easter?

What words might Jesus’s friends have used to explain their experiences that day?

This drama presents words Mary Magdalene might have shared.

This drama might also be titled, ‘Called by name’.

Mary Magdalene.  Picture her, this friend of Jesus.  Close your eyes if it helps you imagine.  There, in the dark cemetery she stands.  At the mouth of Jesus’ tomb, now gaping open, the stone cover removed.   She tries to look inside.  Has someone stolen Jesus’s body?  Unbelievable.  How could anyone stoop so low?  She scurries away to share the news, to get help.  She finds Peter and another disciple.  John, probably.  Mary tells them what has happened.  They hurry to the cemetery to confirm for themselves what Mary has reported.  An empty tomb confirmed, they depart.

I am Mary Magdalene.  And you?  Not gardeners.  Angels, perhaps? From the future?  Then, of course, I am from the past.  But whether from the past or the future, the truth remains the same.  Jesus is risen!

I saw the empty tomb this morning.  I thought someone had robbed the grave.  Peter and the other disciple, that was John, they came to see what I saw.  Typical, I don’t think they believed me.  Had to see it for themselves.  But even then, Peter did not understand.  He is often dense as, well, as dense as a Rock.  John saw and believed, but… he did not understand.

Me?  I could not make sense of it.  My grief at Jesus’s death and then, my grief that his body had gone missing– left me in shock.  I stood weeping.  Holy ones appeared.  I still did not get it.  Then, I turned and saw… well, you heard what was read, I saw a stranger in the garden.  I tell you, I looked that stranger in the eye.  I did not know who it was.  I assumed this stranger was the gardener.  “Where have you taken him?”  I asked.  “Tell me where is Jesus’s body?”

Of course, I can scarcely believe it!  Dead and buried on Friday, resurrected and alive on Sunday.  How did it happen?  What does it mean?

I guess, for me, it means the power of God made visible.  Jesus’ resurrection means to me that God says:  Yes! to life, and God says a resounding No! to death.  Just as Jesus fearlessly went to the cross and death, we need not fear death, either.

Rather the goodness of God’s creation and God’s love reigns supreme.  As in the psalm: God is good, God’s steadfast love endures forever.  God is our strength, our might and our salvation.

Another mystery that baffles me, is that I did not recognize Jesus in the cemetery.  You might be asking that, too: Why did I not recognize Jesus?   I do not know.  I was so confused and afraid.  Yet, when he called my name, immediately, I knew who he was.

Names are powerful.   My friends know my name.  They, like Jesus, call me, Mary.  My mother, when she wants my attention, she still calls my full name, Mary Magdalene!   It means a lot to me to be recognized, for someone to know and say my name.

That’s what I like about baptisms.  The waters of baptism are certainly important, but for me, I feel Jesus’s presence when the person’s name is spoken aloud.  It’s like the minister and the church speak on Jesus’s behalf, inviting the person being baptised, the family and all the witnesses, to recognize Jesus there at the baptism.  Surely, Jesus knows and calls each of us by name.

[Look at people in the gathered congregation and call them by name…]   Peter, Fiona, Alice, Noah, Adam, Barbara, Margaret.  Knowing and speaking someone’s name.  It is powerful and wonderful. [pause]

Names….   I, Mary Magdalene, did not recognise the Chosen One when I saw him.  No, for me, the reality of the resurrection was not in the seeing, but in the hearing.  The truth of Jesus’s resurrection became known to me in the sound of my name.

When does a person come to know and recognise Jesus?

For Peter, knowing Jesus, came when he experienced Jesus’s deep forgiveness of him by the shores of the Sea of Galilee.

For other disciples it happens in the breaking of the bread shared with the risen Jesus at communion in the little village of Emmaus.

Thomas needs to see and feel first.  He will not believe, he will not fully recognize Jesus, until he puts his finger in the mark of the nails and thrusts his hand into Jesus’ wounded side.  Jesus, knowingly, will ask Thomas, “Have you believed because you have seen me?  Blessed are those who have not seen and yet have come to believe.”

Each of us comes to believe in different ways.  There is no right way.  Whether by name or by experience, by touching or by sharing a meal together, we can know Jesus.  We can recognise Jesus face-to-face in our times of grief, on the roads near our homes, in our desperate moments.

The truth remains the same.  Jesus is risen!  Feel his presence?  He has called you by name.  As he lived and walked among me and my friends, once upon a time, he still lives and walks among you.   You may not recognise him at first, but open your eyes to see, reach out your hand to touch, open your heart to believe, and open your ears to hear him calling your name.

Remind us that we are fully known and loved.

Come close to us, re-claim us for life.

Come close to us, and never let us go. 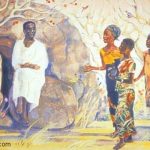 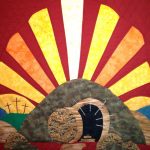 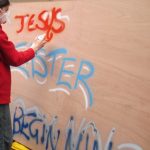