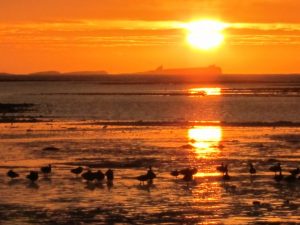 A Statement of Faith (translated from the Spanish)

I believe in the God who fired the first sun,
who made life beat and who made it beautifully diverse,
who went out to play, naked, through the gardens of the universe
without fear of time, smiling, greeting the breeze.

I believe in a God who befriended the creatures,
who hugged the tree and swam with the fish,
who sat next to the lion and the lamb
and danced with the birds in the air.

I believe in a God who walked with people,
who taught them to dream and urged them to be free,
who pointed them toward a horizon of fullness…
But they did not understand or did not want to or were afraid.

I believe in a God who was imprisoned in prejudice,
who was gagged by concepts and doctrines,
who was locked in dark and oppressive spaces,
who was limited in the capacity to love and heal.

I believe in a God who wants to be free from so much chain,
who wants to shake off the dust of the old creeds
and break the structures of forms and dogmas
to return to being an inclusive, broad, generous God.

I believe in a God who seeks to be present, real, authentic,
in so many other ways of believing, of celebrating, of living;
a God who continues being revealed in the history
of women and men who never lost sight
of that horizon, that light, that possible world.

I believe in a God willing to descend into the hells
of the unjustly subjugated,
of the violently marginalized,
of those trapped in webs of deceit and death,
of those stigmatized for being different,
of migrants without land, without homes, without mercy,
of those mutilated, raped, beaten,
of the victims of hatreds that injure and kill ,
of the silenced, the disappeared, the nobodies.

I believe in a God who encourages us to be a community,
to be a body, meeting in solidarity
of one another, of one another,
to build alternative spaces with a place
for each human being
in their complex and rich diversity..

I believe that in these spaces,
the bread that is shared becomes sacrament
and that the cup passed from hand to hand,
without prejudice,
is glorious manifestation of the power of a love
capable of transforming everything.

I believe in a God who has not given up hope,
despite everything,
and who, from time to time,
smiles again.

Oberman writes prolifically on the website LUPA* providing liturgical resources.  Thank you to Gerardo for allowing Worship Words to share his work.

Gerardo Oberman, ordained in 1965, served as Pastor of the Reformed Churches in Argentina and President of the Reformed Churches in Argentina from 2009. He completed his study of theology in the ISEDET (Buenos Aires) and the Free University of Amsterdam (Netherlands). Oberman is one of the founders of the Red Crearte — space dedicated to liturgical and musical formation and renewal in Latin America.

*Lupa Protestante (Lp), founded in 2005, is a digital magazine of theology, opinion and culture from a Christian-progressive, evangelizing, critical, ecumenical, inclusive and in dialogue with contemporary society and non-Christian religious traditions.  Lp is committed to the defence of human rights in all areas, both religious and secular. Lp is an independent publication and is not linked to any ecclesial institution.’