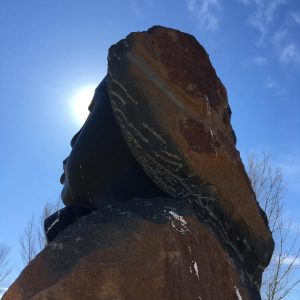 Reader 1:
Today’s reading is a familiar story from Luke’s Gospel, a story about a woman who takes action.
Luke writes:
One of the Pharisees invites Jesus to a meal.
When Jesus arrives at the Pharisee’s house and takes his place at the table, a woman comes in, who has a bad name in the town.
She has heard Jesus is dining with the Pharisee and has brought with her an alabaster jar of ointment.
She stands behind Jesus at his feet, weeping, and her tears fall on his feet, and she wipes them away with her hair.
Then she covers his feet with kisses and anoints them with the ointment.
When the Pharisee who had invited Jesus see this, he says to himself,

‘If this man were a prophet, he would know who this woman is who is touching him, and what a bad name she has.’

Jesus:
‘Simon, I have something to say to you…
There was once a creditor who had two men in his debt.
One owed him five hundred denarii, the other fifty.
‘They were unable to pay, so he pardoned them both.
Which of them will love him more?’

Simon:
‘The one who was pardoned more, I suppose,’

Reader 1:
Then Jesus turned to the woman.

Jesus:
‘Simon, you see this woman?
I came into your house, and you poured no water over my feet, but she has poured out her tears over my feet
and wiped them away with her hair.
You gave me no kiss, but she has been covering my feet with kisses ever since I came in.
You did not anoint my head with oil, but she has anointed my feet with ointment.
For this reason I tell you that her sins, her many sins, must have been forgiven her, or she would not have shown such great love.
It is the one who is forgiven little who shows little love.

Reader 1:
Then Jesus said to the woman…

Jesus:
Your sins are forgiven.

Reader 1:
Soon afterwards Jesus went on through cities and villages, proclaiming and bringing the good news of the realm of God.
The twelve were with him, as well as some women who had been cured of evil spirits and infirmities:
Mary, called Magdalene, from whom seven demons had gone out, and Joanna, the wife of Herod’s steward Chuza, and Susanna, and many others, who provided for them out of their resources.