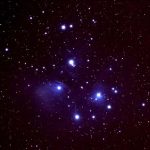 Traditionally for the Maori, Ngā Mata o te Ariki, more commonly known as Matariki, is a time to remember those who have died in the last year.  The Progressive Christianity Aotearoa website provides the outline of a service that may be used for Matariki, All Hallows Eve or All Saints Day.

Matariki is the Māori name for the cluster of stars also known as the Pleiades.  Matariki (the Pleiades) rises in  late May or early June.  For many Māori this rising heralds the start of a new year.

As Matariki usually occurs during harvest time, it is also a thanksgiving celebration and is sometimes called the New Zealand Thanksgiving.

Matariki literally means the ‘eyes of god’ (mata ariki) or ‘little eyes’ (mata riki). According to myth, when Ranginui, the sky father, and Papatūānuku, the earth mother, were separated by their children, the god of the winds, Tāwhirimātea, became so angry that he tore out his eyes and threw them into the heavens.

Divine Matariki come forth from the far-off heaven, Bestow the first fruits of the year upon us.

Matariki will be a distinctly New Zealand holiday; a time for reflection and celebration, and our first public holiday that recognises Te Ao Māori.

To read more about Matariki, read the full article by Paul Meredith.