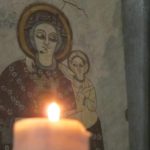 Jesus: “You will all become deserters…”

Peter: “Even though all become deserters, I will not!”

Jesus: “Truly I tell you… this very night, before the cock crows twice, you will deny me three times.”

Peter: “Even though I must die with you, I will not deny you…”

Peter: We all saw Judas kiss Jesus then… that mob seized Jesus. A sword appeared from nowhere. The High Priest’s slave’s ear is cut off. Then I knew trouble would avalanche. Amid the shouts and confusion I hide in the roots of an old olive tree. What happened to you lot?

Disciple 2: (Stand in pew, call loudly to Peter) We high-tailed out of there, scattered. Where did they take Jesus?

Peter: The mob drags Jesus from the Mount of Olives. I follow at a distance. We cross the Kidron Valley and enter Jerusalem’s east gate. The city streets are empty at that hour. I lag behind. I do not want to be seen or caught. Following their torchlights and noise is easy. They lead me to the High Priest’s house.

Disciple 3: (Stand in pew, call loudly to Peter) What? You went to the High Priest’s house?

Peter: Jesus must have been inside. I can not see him. A fire burns in the court yard. No one guards the gate. I enter. I sit with those warming themselves at the fire. You know how cold it is tonight. We all have our cloaks wrapped tight. Only when I sit close do I realize those at the fire with me are from that mob that grabbed Jesus, soldiers of the High Priest. My blood runs cold. Still, I stay to hear what is said.

Disciple 1: (stand in pew, call loudly to Peter) Who spoke? What did they say?

Peter: Who spoke? So-called witnesses. They cannot get their stories straight. False testimony, lies. The priests want, need, two witnesses to say the same thing, to make a case against Jesus. It does not happen. Finally, the High Priest himself, I recognize his voice, asks Jesus: “Are you the messiah?” Now, the priest is speaking Greek and my Greek is not too good. But Jesus says, “I am–” but you know in Greek when you say “I am” it can also mean, “Am I?” The High Priest hears it as “I am,” a confession from Jesus. The High Priest tears his robe and screams, “you have heard his blasphemy!” The High Priest calls for the guards, the men at the fire with me. He hands Jesus over to the guards. They begin to beat Jesus.

Disciple 2: (stand in pew, call loudly to Peter) Ah, Peter, it must have been torture for you listening to Jesus be abused and dangerous, too. Yet, you stayed, loyal to the end. And Jesus thought you would deny him. Good old, faithful Peter… Pause

Peter: No, mates, not so loyal, not so brave… pause. The guards are busy beating Jesus. With their departure from the fire there is room for others to warm themselves. The serving women gather at the blaze to see and hear what is going on. One of them looks at me and says, “Hey, you were with that man from Nazareth. You were with Jesus!” The night is chilly but I break into a sweat when she fingers me. I can hear what they are doing to Jesus. The High Priest has accused Jesus of blasphemy. When the guards are done with him, they will stone him to death.

In fear I say to the serving woman, “I do not know what you are talking about, woman! I do not know him.” The courtyard cock crows. To put some distance between me and that nosy woman, I move to the gate.

But people have heard her accusation. Others are looking at me. She follows me. She says to the surrounding people, “This man is one of them!” There is such venom in her voice, my denial comes quick, “I do not know that Galilean!”

Now, I stand outside the gate. I still want to know what will happen next to Jesus. Another bystander measures me up and says, “Certainly, you are one of them. I can tell by YOUR accent you are a Galilean.”

I curse my accuser and shout, “I swear on my mother’s head I do not know this man!” And with that, I hear the courtyard cock crow, again.

At the passover dinner tonight, I had sworn to Jesus, sworn to him, that even though everyone might desert him, I would not. Even if I had to die with Jesus, I would not desert him.

Remember what Jesus said to me? (yes, before the cock crows twice, I would deny him three times.) Fearing for my life I, I fight my way through the crowd and escaped Back in the Kidron Valley, where it is dark as death, I break down and weep, sisters and brothers. I weep bitterly. (Peter sits and puts his head in his hands.) Pause…