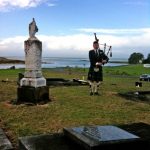 This All Saints Day service was originally posted on the Progressive Christianity Aotearoa website.

This service may also be used for Matariki, a traditional Maori mid-winter festival which marks the beginning of a new year for Maori.  Matariki is a time for remembering the dead, and celebrating new life.

An idea for All Hallows Eve:

I wondered what would happen if instead of sitting in our church buildings worrying about people missing the significance of All Hallows eve, we left the church building and got engaged in adding significance to the halloween celebrations going outside. I suggested we might gather at a church yard, with a fire and remember the people buried there, and place candles on their graves in remembrance