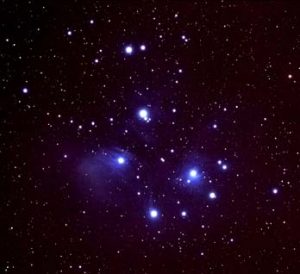 Genesis 1 is often included in readings for the Easter vigil, Trinity Sunday and Epiphany.

As the stars slid down the beams of the universe in it’s beginning,
they burned with love….
so much so that some became vulnerable and exploded.
Eons later, in free fall toward our planet
many of their parts held us tight,
protecting the life that had begun in them.
As they reached mother earth they fell into her bosom
where life was nourished by her water and the sun.
Waiting…waiting…waiting…
then, when the time was right,
the music of the water sang us into being,
trusting us to remember from whence we came.
From stardust we have come and to stardust we shall return.

A reflection upon reading that some scientists believe life may have begun in meteorite fragments, such as those that fell on a frozen lake in Canada’s Lake Tagesh, rather than on earth.