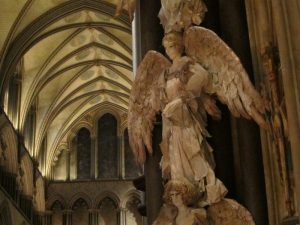 We have two stories this morning.  The first is from classical literature.  See if you recognize it.

Narrator:     Once upon a time, there was a rich man dressed in purple cloth and fine linens.  One afternoon, on the day of Christmas Eve, the rich man sits in his office counting his money.  Let’s listen in…

Stranger 1:  [smiling, cheerful]  Good afternoon, sir.  At this holiday time of year, we seek donations to assist the poor and the destitute.  Many men, women and children lack the basics.  We aim to help them, to shed some light and joy into their lives this Christmas time.

Rich Man:   [ in a gruff voice]   Are the work houses still running?

Rich Man:   Are there no prisons?

Rich Man:   Oh!  I was afraid from what you said, that they had all closed.  I am very glad to hear the work houses and prisons still operate.

Stranger 2:    [The two strangers glance at each other, then one says to the rich man]    Sir, as we were saying, a few of us are raising funds to brighten the lives of those who suffer, especially at this time of year.  What shall we put you down for?

Stranger 1:   Nothing, as in you wish to remain anonymous?

Rich Man:   Nothing, as in I wish to be left alone!  I do not make merry at Christmas.  I cannot afford to make idle people merry.  I support the work houses and the prisons.  They cost enough!  Those who are badly off can go there.  Good afternoon!   [Gruffly, turn away]

Actors Pause for a moment and then sit down.

Anyone recognize our grumpy rich man from literature?  [allow time for people to answer]

Not a nice guy at the beginning of the story, is he?

Now, our second story comes from another piece of literature, the Bible.

From the Gospel of Luke, chapter 16, beginning with verse 19.

Listen to the story Jesus told…

[Jesus said] “There was a rich man who was dressed in purple and fine linen and who feasted sumptuously every day.

And at his gate lay a poor man named Lazarus, covered with sores, who longed to satisfy his hunger with what fell from the rich man’s table.

Even the dogs would come and lick his sores.

The poor man died and was carried away by the angels to be with Abraham.

The rich man also died and was buried.

In Hades, where he was being tormented, the rich man looked up and saw Abraham far away with Lazarus by his side.

He called out, ‘Father Abraham, have mercy on me, and send Lazarus to dip the tip of his finger in water and cool my tongue; for I am in agony in these flames.’

But Abraham said, ‘Child, remember that during your lifetime you received your good things, and Lazarus in like manner evil things.

But now he is comforted here, and you are in agony.

Besides all this, between you and us a great chasm has been fixed, so that those who might want to pass from here to you cannot do so, and no one can cross from there to us.’

The man who had been rich said, ‘Then, father, I beg you to send Lazarus to my father’s house—for I have five brothers—that he may warn them, so that they will not also come into this place of torment.’

Abraham replied, ‘They have Moses and the prophets.  They should listen to them.’

The man said, ‘No, father Abraham; but if someone goes to them from the dead, they will repent.’

Abraham said to him, ‘If they do not listen to Moses and the prophets, neither will they be convinced even if someone rises from the dead.'”

Here ends the reading from Luke.  May our hearing be blessed with understanding.

They both care for their money and ignore the poor people right on their doorstep!

But… that is not the Bible’s message.

Paul, in his letter to Timothy, stresses that  the love of money is a root of all kinds of evil.

For when we love money, we cannot also love God.

We cannot be arrested and imprisoned simply for being greedy, but our love for our money and wealth can hold us captive, so that we are possessed by our possessions. 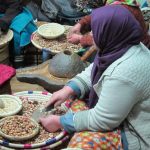 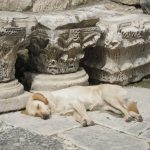 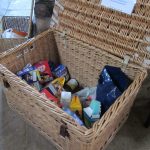