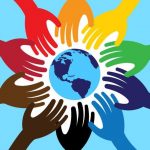 Lead me from death to life, from falsehood to truth;
lead me from despair to hope, from fear to trust;
lead me from hate to love, from war to peace.
Let peace fill our heart, our world, our universe.

Each day at noon people of all faiths and none use this ‘Universal Prayer for Peace’. This forms a wave of prayer and hope rippling each day around the globe.

There is a world peace prayer society encouraging its use, alongside the simple prayer, ‘May peace prevail on earth.’

From the website ‘Liturgy: Spiritual practices for a digital world‘:

Although it has also been credited as an adaptation by the Hindu Swami Chidananda Saraswati, it is a well known adaptation of the famous mantra from the Hindu Upanishads by Satish Kumar. Satish Kumar is a former Jain monk. Since 1973 he has lived in England.  Jainism is a relatively small religion originating in India. It has approximately four million adherents world wide. Satish Kumar’s adaptation was designed to be able to be used by all people of all languages and beliefs.

The prayer was first publicly used in July 1981 by Mother Teresa in the Anglican Church, St. James’, Piccadilly in London.

In the Prayer Book this prayer follows an adaptation by Jim Cotter of a 1976 Buddhist litany for peace (p163). This litany originates with the Vietnamese Buddhist monk Thích Nhât Hanh (Jim Cotter, Thursday, Prayer in the Day).