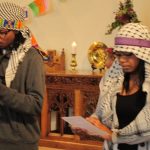 A shepherd’s recollection of that first Christmas, read as a dramatic monologue

Note: shepherds and angel may be presented as female or male as desired.

It’s true! It sounds crazy, I know, but I’m telling you, it’s true. It was the most wonderful thing.

We had the sheep in the fold for the night. It was gone midnight; a clear night. I was on watch…and I was dozing a bit, you know, but…with one eye open. A shepherd always sleeps with one eye open. And one ear open – if one of my sheep so much as stirs I’m alert.

So, there I was, laid across the entrance to the fold, just…resting my eyes, when something woke me. A little commotion amongst the flock. They weren’t making a fuss, I just sort of sensed that the sheep were awake and watchful….something was going on. I realised there was a light – at first I thought it was the dawn on the horizon but it was too early, and becoming too bright, and suddenly I made out the shape of a figure, surrounded by light – an angel!

Well, I jumped to my feet quick as anything! Gave Nathaniel/Natalie a kick with my toe and in a second s/he and Joan/Joel were up too, all three of us shepherds sort of hugging each other in sheer terror, as this strange light just got brighter and brighter and seemed to be all around us.

Do not be afraid; for see – I am bringing you good news of great joy for all the people: to you is born this day in the city of David a Saviour, the Messiah, the Lord. This will be a sign for you: you will find a child wrapped in bands of cloth and lying in a manger.

Then…you won’t believe this! There were hundreds of them! Hundreds of angels! The whole sky was full of them, there was light and music everywhere, they were all laughing and singing and saying,

Glory to God in the highest heaven, and on earth peace among those whom God favours!

Then they were gone. We all looked at each other, making sure we’d all seen what we thought we had.

The sheep, who’d been so quiet the whole time, suddenly started bleating and making a racket. Now, normally you understand, a shepherd doesn’t leave the sheep, not for anything. But we had a quick chat and we knew what we had to do.

We legged it down the mountainside and all the way into Bethlehem – somehow our feet just seemed to know where to take us. And we found them, in a stable of all places, just like the angel had said. A baby, looking for all the world like any baby, lying in a box of hay. After all the bright lights and heavenly host it looked so…ordinary.

And yet, when I told the baby’s mum all about the angels and what they’d said, she didn’t seem a bit surprised. She just smiled.