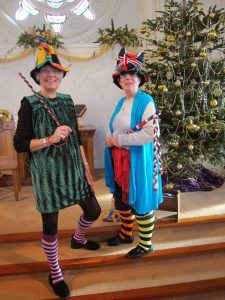 A British Panto never ruins a fairy tale, only makes it better.  So logically, a Nativity Panto (or almost-Panto) won’t ruin the treasured Christmas story, but will only make it better.  That’s the case with…
The King’s Christmas: a Modern Medieval Play

A large congregation in Southeast London created a delightful almost-panto for a large cast production.  Replacing the traditional Sunday morning nativity (but in no way replacing the beloved Carols and Readings Christmas narrative), this humorous drama has become an annual tradition in itself — full of personalised knock-knock jokes (that change year-to-year), talking donkeys (think Shrek) and all!

No memorization required!  Allow, even encourage, actors to read from their script throughout the drama.  This increases greatly the pool of willing actors!  The main requirements for actors are enthusiasm and a sense of delight.  All ages can have a part.  Narrator and jester roles will be reserved for the clearest readers.

‘The King’s Christmas: a Modern Medieval Play,’ had its debut performance at St Andrew’s United Reformed Church, Brockley, London, in 2012.  It was adapted, with permission, from ‘Knock, Knock, Who’s There,’ by Rev. Brian Mountford, University Church, Oxford (originally published in a collection of short Nativity dramas entitled Stars of Wonder). 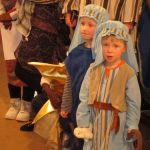 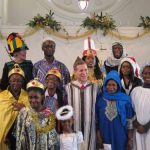 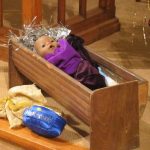