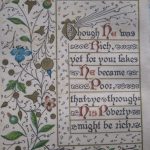 This paper was prepared for the English Language Liturgical Consultation (ELLC) for its meeting in Leuven (Be) August 2017 and is also posted on ELLC’s website .

Tables are provided for each Gospel, presenting the readings in biblical order.

Each reading is matched to the corresponding Sunday and/or holy day on which it arises in the 3-year cycle of the Revised Common Lectionary.

One can easily see which passages are omitted in the 3-year reading cycle.

The text is based on The Revised Common Lectionary (RCL), 25th Anniversary Annotated Edition published by Fortress Press, Minneapolis 2012.

Gospel according to John (readings and dates) in biblical order

The following table gives the passages from John’s Gospel as they appear in biblical order. They are reference by the day and 3-year cycle. A figure in brackets ‘Proper 12 [17]’ references the Roman liturgical calendar.

= the same text is used in both RCL and RL, e.g. on 3rd Sunday of Lent, Year A the same passage is heard

≠ different texts are used, e.g. On 2nd Sunday of Lent, Year A, the Roman Lectionary does not have John 3:1–17

Gospel according to John

Gospel according to Matthew (readings and dates) in biblical order

Table for Gospel of Matthew, indicating omitted passages but without comparison to Roman Lectionary

Gospel according to Matthew

Gospel according to Mark (readings and dates) in biblical order

Gospel according to Mark

Table for Gospel of Mark, indicating omitted passages but without comparison to Roman Lectionary

Gospel according to Luke (readings and dates) in biblical order

Table for Gospel of Luke, indicating omitted passages but without comparison to Roman Lectionary

Gospel according to Luke

Statistics - how much of each Gospel is included in the RCL?

The question behind this paper is in three-year Lectionary cycle where each year focuses on one of the synoptic Gospels how much of John’s Gospel is heard and how much omitted. Based on verse count the following percentage of each Gospel is included in the Revised Common Lectionary.

Passages from John’s Gospel are proclaimed in each year of the Lectionary Cycle and the percentage of the whole Gospel read in each year is:

These percentages combined are greater than 100% because for days, such as Good Friday, when the same text is read each year the passage is often taken from John’s Gospel. These figures support the idea of referring to a Year of Matthew and John, Mark and John, and Luke and John.

This paper was contributed by Martin Foster for inclusion on Worship Words. Martin is a member of the Joint Liturgy Group of Great Britain, Director of the Liturgy Office, Assistant Secretary of the Department for Christian Life and Worship for the Catholic Bishops’ Conference of England and Wales. 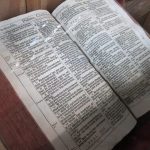 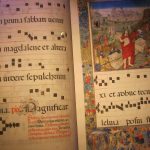 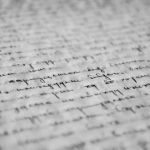